Self Defense - to empower the women of India | Colorss Foundation

The brutal gang rape and murder of a young girl in Delhi has brought worldwide attention to an issue that has plagued India for years - the oppression and gross mistreatment of women in the country.

In India, girls are forced to battle for their fundamental right to live, from the day they are born. Because of social stigma, women in India are often considered inferior and suffer torment and persecution for no reason other than their gender. From a young age, most local women are taught about the dangers they will inevitably face during their lives. Unfortunately, being aware is no longer enough.

While it is by no means an altogether solution for the terrible issue of violence against women, providing Indian women with self-defense training is a great step forward in order to protect their basic freedoms and permit the ability to walk through the streets unaccompanied without fear.

Colorss Foundation, a NGO based in Baroda and Pune, is launching women’s self-defense classes to empower the women of India and provide the skills to remain calm and fight back against attackers, if this is ever required. If there is one thing that the December 16 attack has achieved, it is in spreading the reality that no one is safe from these types of assaults. Every woman in India, through no fault of her own, is a potential victim.

Anand Koti, the foundation’s director, will be conducting the classes. Anand has been practicing martial arts for over 15 years and has a 2nd degree black belt in Karate, which demonstrates his commitment and discipline. In addition, Anand also possesses an undergraduate degree in Industrial Psychology and Masters degrees in Health Management and Industrial Relations and Personnel Management. 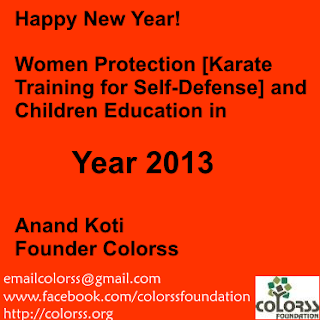 This unique combination of education and passion for martial arts has provided Anand with the perfect blend of skills to successfully pass his knowledge on to students. Under Anand’s supervision, many children from the Pune region have already benefited from Project Enhance, another initiative of the Colorss Foundation. Project Enhance involved providing underprivileged children of the region with martial arts and creative arts classes. The results of Project Enhance have been overwhelmingly positive. In addition to building the physical strength and stamina of the participants, Project Enhance also boosted their self-esteem and confidence.

While the most obvious benefit of these self-defense classes is the ability to defend yourself against an attacker, there are also numerous peripheral benefits, such as increased confidence and mental development. At Colorss, we strive to give women the physical and mental strength to surpass any challenges.

According to the National Crime Records Bureau, there were 24,206 cases of rape registered in India during 2011, but this is suspected to be a major under-representation of the true figure and of the problem at hand.

The worst reaction from this case would be for women to remain indoors, further restrict their activities and escalate the oppression they already face on a daily basis. This should be used as an opportunity to empower the women of India – for them to stand up and assert themselves.

It is in the hands of the government to make a legitimate stance on the issue of violence towards women and make widespread changes throughout the country; however, basic self-defense is a great step forward for the women on India.

It is our goal to empower the women of India to have the confidence to live completely fulfilling lives.

Contact Colorss for more information on self-defense training. You can email us at: emailcolorss@gmail.com and find us on Facebook.

Paul Whelan
Posted by Unknown at 9:31 AM